CBIC uses cookie to ensure you get the best experience while browsing the site. By continued use, you accept the use of such cookies and our approach to privacy. Click Here to Learn More
Ms. AiAi Renews CBIG Endorsement for the 3rd Time – Country Bankers Insurance Corporation 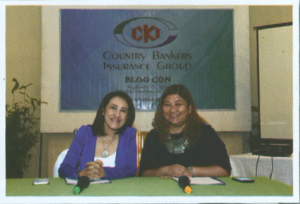 Veteran actress, comedienne and popular TV & movie personality, AiAi delas Alas- Sibayan, renewed in February her endorsement of Country Bankers Insurance Group (CBIG) for 2018. Ms. AiAi first became CBIG endorser in 2012 and renewed her contract in 2013. As company endorser for CBIG, Ms AiAi’s photos will be used in some marketing collaterals of CBIG for 2018. Photo shows her with our SVP & GM, Geraldine Desiderio- Garcia, during the Blog Con of CBIG in February 2018.